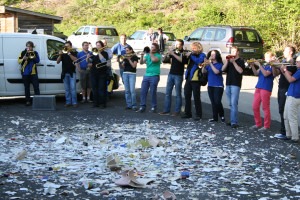 Relations are the thing which make pour life meaningful because no one can live alone or can live a life after being cut off from the world therefore we need to be connected with other people across. The relations are one’s life has great importance because if a person has good terms in his relations with his parents, siblings and friends then he/she will live a good life for sure. But the most sensitive and important relation made on this planet is the relation of a husband and wife because this relation is not only emotional but physical as well. Therefore the marriage of a person becomes one of the most important occasion in one’s life because a person is tied in the knot of a relation which shapes up his rest of the life and thus the wedding ceremonies across the world become so important and people take part in the wedding ceremonies of their relatives with good interest. There are some unique and strange traditions observed in marriage ceremonies across the globe and normally the purpose of the strange and weird wedding ceremonies is to ensure good luck for the couple in their upcoming life. So now let’ have a look at the Top 10 weird wedding ceremonies around the world.

It is a real weird tradition in the country of Romania where the Brides are kidnapped. Believe it or not but it is a common practice in Romania, Bride Kidnapping is a crazy ritual and tradition where a man abducts or kidnaps the woman he wants to marry. It is believed in Romani tradition that if you manage to convincingly or forcefully kidnap a girl and remain her by your side for at least 2-3 days, she will officially be called your wife.

9. Beating the Groom in Korea

Well this seems funny and weird as well. The groom who has to take the burden in upcoming life is beaten on the feet . After the wedding ceremony the groom is beaten on his feet by a dry fish or sometimes by a rope by his friends. The purpose of this tradition is to make the groom stronger before the golden night.

Well usually the wedding is an emotional moment in a girl’s life but in China a planned long term crying is observed as a month before the wedding, a bride is expected to cry for about an hour. After 10 days, her mother joins her in the ritual. After another ten days, her grandmothers, sisters and other females unite in the ritual. But the girls make voices like songs during this and this is done for the happy married life.

In the Hindu Tradition the Toe ring is worn by the brides soon after the wedding and the ring is usually made of silver. This ring is put in the right toe by the groom and this tradition is observed for the good luck as well.

6. Humiliation of Bride in Scotland

In Scotland a tradition is observed that a bride is caught by surprise by her friends before marriage and eggs, flour, and other things are thrown at her and she is tied with a tree and then humiliated  by putting on spoiled food, eggs fish etc . Scottish brides undergo with the belief that if you can handle this you can handle anything, even marriage.

Polterabend is an old tradition in Germany where after a good feast from the newlywed couple to their relatives the dishes are broken intentionally. The purpose of this tradition is to keep the evil and obstacles away from the couple.

India is an amazing country with some amazing and really weird traditions. In many areas of India it is believed that if a boy or a girl is born on Tuesday than he is a “Manglik”and the person has to be married with an animal before getting married to a human being so his bad luck will be diverted to the animal.

Charivari was a tradition in the 19th century in France where the friends and family of the couple used to make as much noise as possible outside the couple’s room to disturb them. The purpose is un known but it should have been fun.

2. Over Feeding the Bride in Mauritania

Well in the modern day world where the Brides join the gym to get slim n smart before the marriage , the girls in Mauritania are sent to special “fat farms”where they are fed with high calories and it is considered that the heavy and healthy the bride would be, the better luck she will bring for her husband.

In some tribal areas of Malaysia the newlywed couple is not allowed to urinate or empty their stomach for 72 hours after their marriage. Their family guards the bathroom and his ritual is based on the belief that if you can get through 72 hours of pure torture together, you can get through anything in life.