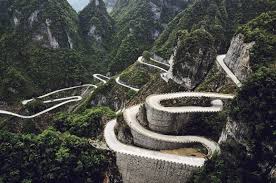 Roads are beneficial in providing a means for safe travel ad movement of good and people but there are many roads in the world that you will encounter as an unsafe one. Areas that bare remote places and do not have great infrastructure have such dangerous and unsafe roads but the people living in such areas have to travel through them daily for their transportation. The top 10 most dangerous roads in the world are:

This road though is known as the base for the Nanga Parbat in Pakistan which is the ninth highest mountain in the entire world with the height of 26,660 feet. The thing that makes fairy meadow a dangerous road is the fact that there is a narrow 6-mile mounts on an unpaved and jagged road and there are no barricades to avert a vehicle from falling off the cliff and into the canyon.

Trans-Siberian Highway along with the Trans-Canada Highway as well as Australia’s Highway 1 is one of the longest highways in the entire world apart from being the most dangerous one too. The dangers of this road ae very high during the winter season and so they became very dangerous to drive on because of the water, heavy snow and ice and the fact that there is no visibility to the road at all.

The location of this dangerous road is in the Italian Alps and the road is present in the form of a zig zag pathway with various sharp twists and turns. This road is approximately 9,045 feet high, making it the second highest cemented pass in the Alps and above the pass there is a peak called Three Languages Peak.

It has been named as one of the most dangerous roads of the United Kingdom by the road safety foundation during the year 2010 because there have been more than 30 fatal and casualties cases from 2006 to year 2008. The road has various treacherous bends, steep and sharp edges along with the stone walls that makes it even more dangerous.

In terms of altitude Halsema Highway is the highest highway of Philippines and is more than 150 miles long with the dangers of mud and landslides, falling rocks and slippery roads making it very hard and dangerous for the small vehicles to travel in.

The road between Kashmir and Ladakh is known as the Zoji La and this road gives the appearance of more like a dusty pathway than an actual road. The nine-kilometer section of road rambles over the foothill at 3,528 meters, with no obstacle on one side and just the hard rock face on the other which is not for anyone distressing from unsteadiness or a fear of mudslides.

The name is translated to Trolls footpath in English and is located in Rauma, Norway. This road is dangerous because of the presence of the piercing turns, precipitous inclines, and narrow roads. It is so hazardous that the government proscribes vehicles over 39 feet long to travel on this road.

03. Guoliang Tunnel in the Taihang Mountains:

Although this road is not very scary for the drivers of today life but for the Chinese villagers who lacerated this 1.2-kilometer passageway along the brink of the Taihang mountains in 1972, it proved lethal because some of them were killed during the construction and some were gone while making slight driving mistakes.

It is declared among the dangerous roads of the world by Inter-American Development Bank which is 3.5 kilometers over 65 kilometers steep enough to make the dangers look very real.

It is located in the North Yungas region in the Bolivia and is more than 40 miles long according to researches done on this road there has been an approximation of 200 to 300 people that have died driving on this road as There are life-threatening drop-offs that make the drive very treacherous, specifically having no railings to stop you from falling.