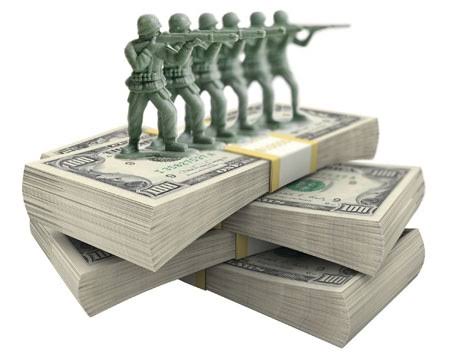 As the world is evolving and making some of astonishing predictable developments in different fields, same as it is also facing some of glitches, threats and issues. All of the countries in the world are facing a lot of security intimidation from each other on different issues. In the past two world wars have been taken place and now our world is fighting against the terrorism, an enemy which is not documented till today. That’s why there are most of countries have made their defense budget too much high. Here we are presenting a list of Top 10 Countries With Highest Defense Budget.

At the last place we have South Korea with the total budget of $ 42 Billion. It is also making a progress to enhance its protection shield and to make some of advancements in its attack criteria on enemy.

Another former super power which is in the competition of being the best in the whole world named Russia which has total defense budget of $ 47 Billion. As we all know that Russia and United States are the former contenders who are in a continuous battle of being most powerful against each other since the World War II. With the passage of time and progress in nuclear technology both of the countries are preparing themselves against each other and also strengthening their defense mechanism.

The total defense budget of Japan is $ 47 Billion. which is a key part of its total budget. From the economy’s point of view Japan is in the top listed countries and from the past few years it is measured as the hub of economy and all of the technological progresses are fetched up by the Japanese industries which are further used and prolonged by the other countries.

France has the total budget of $ 48 Billion. Like the other countries France is also concerned about its security and the protection of the entire citizen and its independence.

United Kingdom has total defense budget of $ 49 Billion. It is a well-known economy and has a number of well-known states and cities in it which appeal a huge sum of people here from around the world every year and make a recovering effect on the economy. As associate to the extension of the state the United Kingdom requires a huge defense budget that is plenty for the state to stay well equipped, advance and ready for protection. Other than that, like United States the United Kingdom is also involved in some of external wars that demand a high budget.

Saudi Arabia a well known Islamic state which does not entail any kind of introduction consumes total defense budget of $ 51 Billion. In the past time it was well-thought-out in those countries which do not have an army because they do not have any security issues or threats. But at present due to some of security fears and an emerging belligerence between the countries now Saudi Arabia has its own army and a defense budget as well.

Germany is also in the contest to get the best defense shield against its opponents, with the total budget of $ 53 Billion. At contemporary it is not having a Hitler but it is besieged to get innovative in all of defense weapons.

India is in our list with the total defense budget of $61 Billion. With its progress in the field of economy and technology it is fulfillment advanced in defense and war industry. This is because of its neighbor rival Pakistan. From the day of independence both of the countries are fighting with each other on different matters and still the battle field is on.

Another emerging economy China is with the total defense budget of $ 177 Billion. Like the other field china is getting advanced in the field of defense because its economic progress apprehensions it to preserve its defense resources.