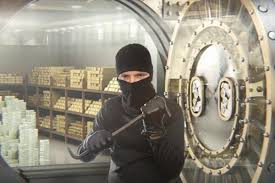 The great artwork of Degas, Rembrandt and Vermeer were theft. Also dacoits took the security tapes which is still missing. The play “The Concert” was one of the most devastating losses suffered by Stewart Gardner Museum in Boston after the robbery that occurred there on 18 March 1990. They disappeared several works, but none of the value of this painting. Vermeer just leave drawings and this is one of the 36 that did in his life.

It is considered as the perfect robbery because they had to overcome ten levels of high security and still managed to steal the diamonds without jump or an alarm and without leaving a trace. The booty has not appeared although the leader of the band, Leonardo Notarbartolo was sentenced to 10 years in prison for stealing. In February 2003, Notarbartolo was arrested and accused of having entered a two-story dome located under Diamantas Center Antwerp, Belgium, and stealing $ 100 million in diamonds, gold and jewelry. It was thought that the vault was impenetrable. Its 10 levels of security including heat detectors, radar, magnetic zone, seismic sensor and a lock with key over 100 million combinations. An impossible robbery until today the police do not know how it was done.

Four robbers entered this central Parisian jewelry in broad daylight and the establishment full of customers. Pretending to be customers interested in purchasing any of exclusive jewelry shop, Harry Winston, one of the most prestigious in Paris, France. Four robbers, two disguised as women, underwent gunpoint clients and jewelry makers, to escape with the loot.

7.The Knightsbridge Security Deposit in the UK: 77 Million euros (111 Million dollars) in 1987

Under the guise of renting a safe, two of the robbers were introduced into the security camera and there they got tying the security guards. Then they let their peers and burst all the boxes. However, they left an imprint that identified with Vireo Vici, which led to the band, which was caught a month later.

A historic theft regarded for many years as the theft of the century. When traveling on the English countryside, the train loaded with money traveling from London to Glasgow was assaulted by a gang of 15 men. One of them were arrested after 13 thieves’ escaping.

The year was 2005 when ten men dug 82-meter tunnel that led directly to the vault where the money from the Central Bank of Brazil was kept. They stopped at 4 of them (the other 6 are still missing) and recovered 68 stolen 70 million dollars.

Two armed robbers entered impunity, in the light of day, this luxurious jewelry from central London. The criminals dressed in gray suit, white shirt and cravat docked at gunpoint shop Graff Jewelers. Security forces also broadcast images of some of the jewels stolen by the robbers, which include white diamond earrings, a diamond ring and platinum and yellow diamond necklace with floral types.

Robbers kidnapped the director and one of the employees and their families in their private homes, then forced to take to the bank while maintaining kidnapped their families at home. Later on they were arrested. They were charged three IRA members, and convicted for it.

The last of the biggest robberies took place on March 18, 2003 at the Central Bank of Baghdad in Iraq. One day before the coalition forces began bombing the country, Saddam Hussein sent his son Qusay to make a withdrawal on his behalf with a handwritten note. In an operation that took nearly five hours, Qusay oversaw how boxes filled with $ 100 bills and were deposited in three trucks. In total the sum amounted to about one billion dollars. As it is known, Hussein was captured in December of that year and his son was killed by US troops. About 650 million dollars were found by US soldiers hidden in the walls of one of the palaces, but the remaining 350 million are considered lost.

A group consisting of about 35 men took 150 million dollars from the bank on the weekend of 6 and 7 August 2005. It was like a robbery movie; highly planned, in which robbers dug a tunnel about 80 meters that led directly to the vaults where the money was kept. The group rented a nearby house and used it to create an alleged landscaping company. From the house they excavated the tunnel, which took three months of hard work. Although they were all captured, authorities were able to recover only slightly more than 10 percent of the stolen money. The Assault CB (2011) film, directed by filmmaker Marcos Paulo was inspired by this event.