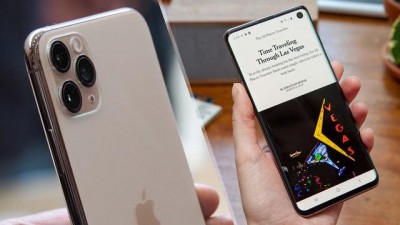 The list below has compiled all the 10 Differences Between iPhone 11 pro vs Samsung Galaxy s10 that actually matter. Nowadays smartphone companies are all engaged in a constant war of more and better features. Which is making it harder and harder to select a smartphone you should actually purchase. The ever changing specifications and updates can make phone comparisons extremely hard.

iPhone 11 Pro has an overall body size of 5.67 x 2.81 inches with a screen-to-body ratio of 82 percent. Comparatively, S10 has a bigger screen-to-body ratio. which makes it more attractive to look at as it has become almost an industry standard to maximize the screen size. Apple decided to keep the notch which makes the design look less sleek and sophisticated giving an edge to the Galaxy S10.

Coming to Galaxy S10, it has a larger overall body size as well (5.90 x 2.77 inches) making it a complete winner when it comes to display and phone design. Both of these phones are equally thin with Iphone 11 pro being a slight 0.01 inches thinner.

Moving on to the weight of both phones, Galaxy S10 has a substantially slighter design at 157 grams whereas iPhone 11 pro weighs around 188 grams. In this era of constant weight-cutting and slimming downs of phones the difference is huge and makes all the difference. But for the Galaxy S10 it is not a major upgrade from its previous versions. so if you already have one of the latest Samsung phones it will not make much difference if you upgrade to the S10.

iPhone 11 Pro has a custom made build quality by its supplier Corning, Gorilla Glass. Samsung Galaxy S10 also has Gorilla Glass 6 for its front build and Glass 5 for the back. While both phones use the same company, Apple claims that the Glass used on iPhone 11 pro is tougher than any other build quality currently available in the market.

Moreover, Iphone 11 Pro  only has a stainless steel frame whereas the Galaxy S10 has an aluminium frame. which makes the build stronger and tougher giving it an extra layer of protection and damage resistance.

Galaxy S10 also has a better resolution than iPhone 11 pro. The Galaxy S10 has a screen resolution of 1440 x 3040 pixels which is bigger than the iPhone 11 pro at 1125 x 2436 pixels. Overall, the Galaxy S10’s display can be sharper to look at and can also give much more accurate colors and hues.

You May Also Like Top 10 Most Expensive Android Cell Phones

iPhone 11 Pro, as always, does not offer a card slot for memory cards. whereas in the Galaxy S10, you can use the MicroSD card and any other MicroSDXC Card. Having an option for memory cards can make all the difference if you don’t want to pay for extra storage or generally keep more storage. Having a memory card option also means that your data is not bound anywhere in the phone and can be moved easily.

iPhone 11 Pro offers an overall faster charging experience compared to the Galaxy S10 as Apple just claimed that the battery can be charged up to 50 percent in only 30 minutes. While both phones offer wireless charging, the galaxy S10 also has the reverse charging option which can be very handy oftentimes.

Differences Between iPhone 11 pro vs Samsung Galaxy s10. The Samsung galaxy S10 has two 12 MP rear cameras and one 16 MP rear camera whereas the iPhone 11 Pro has three 12 MP rear cameras. The galaxy S10 camera is more preferable when you want more real and natural-looking photos rather than processed and corrected photos. Overall, the iPhone 11 Pro camera focuses on warm lighting and complementing hues, it also auto adjusts for the suitability of the environment whereas the Galaxy S10 camera focuses on showing the details and taking sharp and realistic photos with minimal auto adjustments and balancing the hues for the environment.

Galaxy S10 has a much sharper screen display as it has a higher resolution which makes the experience much more enjoyable. Furthermore, Galaxy S10 is highly preferable for video recording as its videos are very sharp and detailed compared to the videos made of iPhone 11 Pro that processes and auto-adjusts the videos a lot. Galaxy S10 is also available only in 8GB RAMs which makes its performance overall higher as you can use it for heavy usage such as for gaming and using multiple apps. Apple wins when it comes to taking selfies and capturing photos of people overall. People love iPhone 11 Pro because of its front camera result and the hues it offers.

iPhone 11 Pro’s 64 GB model costs from $900-1000 whereas you can easily get the Galaxy S10’s 256 GB model for only $500-700 and that too with 8 GB RAM while iPhone 11 Pro only has 4 GB of RAM! Samsung offers a substantially lower price while also offering 192 GBs of extra storage and 4GBs of extra RAM! This is the only biggest difference among both phones. So if you are on a budget and also want performance then Samsung Galaxy S10 is the clear winner here.

Hope you like this 10 Differences Between iPhone 11 pro vs Samsung Galaxy s10 article.